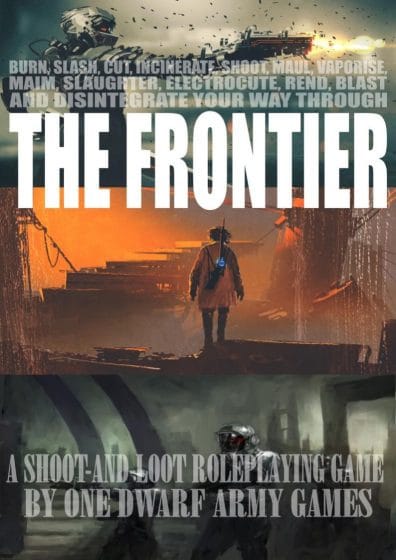 Inspired by action roleplaying games, such as Borderlands and Destiny, The Frontier is a sci-fi game of hi-octane action that focuses on the simpler pleasures of life. Explore the alien ruins of a faraway world, fight a ton of nasties and baddies, and collect a boatload of loot as your reward!

Create intricate characters with complex personalities, then go shoot bad guys in the face and take their stuff!

Guns, guns, guns! A multitude of unique weapons and armor, each with several different randomly-determined variants. Guns that shoot fire. Guns that shoot rockets. Rockets with guns. Even the occasional gun that shoots bullets!

Includes an exciting post-apocalyptic setting, complete with an introductory scenario to get you straight into the action. Don’t like that – no sweat! The setting is completely optional and easily replaced by your own creation.

Uses a simple game system with old school sensibilities to keep things moving at a smooth pace. If you’ve ever played a d20-based game, you already know how to play!

. I took all that crap out to make room for more guns!

The Frontier doesn’t stop with the core book! There are loads of extra stuff available, such as new character classes, monsters and weapons to enrich your game with. Have a look at the One Dwarf Army section on DriveThru RPG for more details.